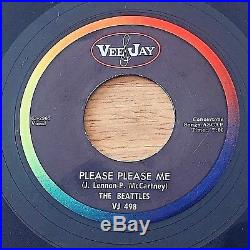 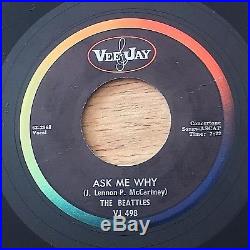 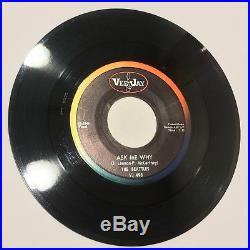 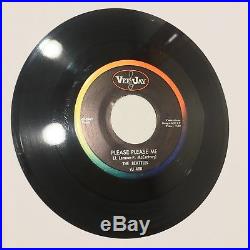 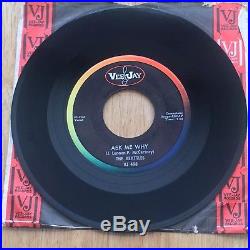 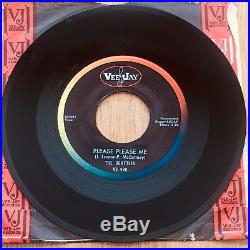 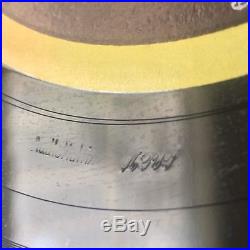 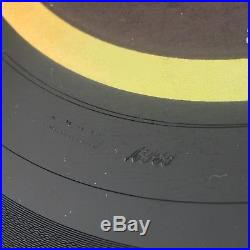 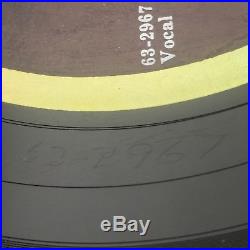 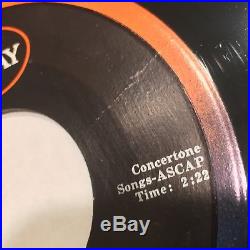 A Must for all serious Beatles collectors. “PLEASE PLEASE ME” b/w “ASK ME WHY” VEE-JAY 498. 45 Please Please Me / Ask Me Why – The Beattles (mispelled)-Vee Jay #VJ 498. VG++ to Near Mint playing surface with a label creasing on the ASK ME WHY side from the Vee Jay factory. ABSOLUTLEY STUNNING COPY THAT RARELY SHOWS UP! CONSIDERED THE HOLY GRAIL AMONG BEATLES COLLECTORS! YOU WILL SEARCH FOR YEARS BEFORE FINDING ONE IN THIS CONDITION. 100% ORIGINAL WITH ALL THE MATRIX INFO!! STORED IN A LATER Vee-Jay COMPANY SLEEVE FOR YOU FOR FREE! Released Fabruary 20, 1963! This is the first record released in the United States to bear the Beatles name. Manufactured by the American Record Pressing Co. The record has thin silver lettering on a black label with oval logo and outer rim colorband. The misspelled THE BEATTLES. The initials ARP appear in script in the trail off areas. (SEE PICS) “AudioMatrix” stamps on the both sides. Matrix numbers: 63-2967 / 63-2968. Accompanied by Later1943 Vee-Jay brackets generic sleeve. The first record released in the United States to bear the Beatles name was VJ-498, which was released on or about February 20, 1963. The single contained the groups second British 45 RPM single, Please Please Me backed with Ask Me Why, and was released in England on January 11, 1963, as Parlophone 45-R 4983. Both songs was recorded at November 26, 1962 on the Abbey Road Studio, London. Interestingly enough, Vee-Jay did not even know how to spell the groups name. All initial issues of the record, as well as advertisements in the trade journals, added an extra T to the name. Thus, when VJ-498 was released in February of 1963, it was credited THE BEATTLES. The songwriters were listed as J. #BEATLES #RARE #45RPM #ROCKANDROLL. The item “45rpm Please Please Me / Ask Me Why Beattles (mispelled) Vee Jay 498 Beatles” is in sale since Sunday, September 9, 2018. This item is in the category “Music\Records”. The seller is “superb-records” and is located in Jonesborough, Tennessee. This item can be shipped worldwide.