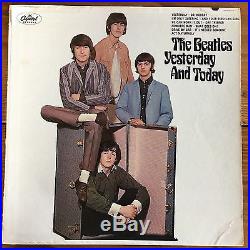 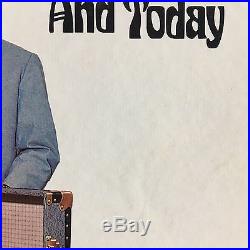 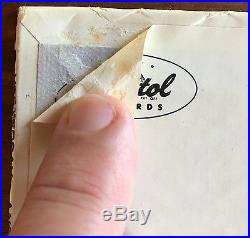 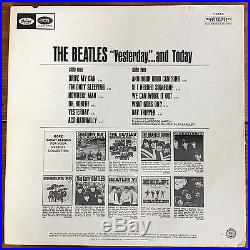 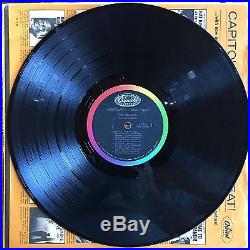 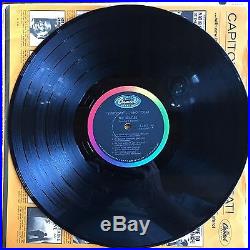 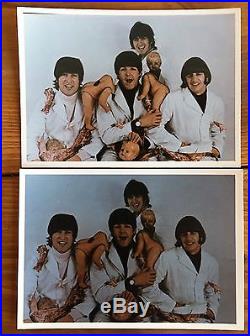 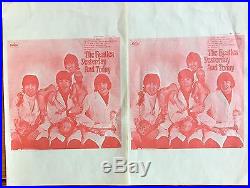 If you are a Beatles fan, this is probably your Holy Grail collectors item. In fact, this may be that album for collectors of any performer in any genre. This is an absolutely beautiful item. It is a second state version of the butcher cover release of Yesterday and Today. It was released on Capitol in 1966, number T2553. The cover is in almost immaculate condition. The top left corner of the taped on cover has been pulled back just enough to reveal a portion of the original Capitol logo. You can see Ringos vest under the word Today on the right side of the cover. This cover has been handled with exceptional care. It shows no ring wear and no corner or edge wear. There is a small crease near the lower right corner. The cover grades VG+. This is the original mono release of the album. The vinyl is in exceptional condition with its bright original luster and just a few light surface scratches and scuffs, none of which significantly impact play. It plays beautifully with just very light sporadic background noise. The original Capitol inner sleeve is included. The vinyl grades VG. Album Tracks: Drive My Car Im Only Sleeping Nowhere Man Dr. Robert Yesterday Act Naturally. And Your Bird Can Sing If I Needed Someone We Can Work It Out What Goes On? I do this to make sure I can give as accurate a description of each record as possible. I will do both a visual check and an audio check. I absolutely attempt to give as objective a grading as I can. I dont ever want you to be disappointed in the quality of the album you receive. I only use four grades in my grading: NM, VG+, VG, and G. The only exception is a sealed album which is presumed to have vinyl in mint condition. My NM grading means that the vinyl looks and plays as though it is the first time out of the sleeve. It may have a pop here and there or some occasional background static. On a VG album you can expect that, typically, this album will play great, but youll see more defects on this than your VG+ rated album. Most often the VG rated album may even play well enough to be graded VG+, but the color or blemishes drop the grading. Likewise, you may occasionally find an album that looks almost NM but the sound quality just isnt there. Thats why I play every album first, because this does happen. In this case the vinyl will be graded VG. Very occasionally I will list an album with a grade of G. This is one where I consider the collectible value of the album to be great enough that the copy being presented is worth having as a filler copy. The vinyl is removed from the cover and presented in a new poly sleeve. Thank you for looking and please contact me with any questions. The item “The Beatles Yesterday and Today Vinyl LP Second State Butcher Cover” is in sale since Sunday, February 19, 2017. This item is in the category “Music\Records”. The seller is “mikesvinylstore” and is located in Saint Paul, Minnesota. This item can be shipped worldwide.