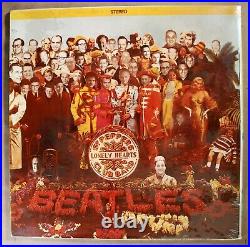 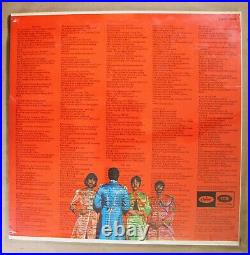 Peppers Lonely Hearts Club Band ULTRA RARE. “Capitol Executives” cover 1967 ORIGINAL! Capitol SMAS 2653 STEREO STILL. SEALED IN THE ORIGINAL 1967 SHRINK WRAP. Here’s the story: In December of 1967, a special Christmas party was. Held at Capitol Records in Hollywood. Was the Beatles Sgt. To commemorate that, Capitol took photos. Of many of the sales reps and executives who helped make the LP the. They took those photos and created a new. Cover slick for the Sgt. Pepper LP using the sales reps and executives. Photos in place of the Beatles and some of the other celebrities on the. A special batch of 100 or less of these new covers were run on. Pepper Stereo albums, sealed up and handed out to the. Party goers at that Christmas Party. You had to work at Capitol Records. As a salesman or executive in 1967 in order to be invited to the party. And given one of these special Sgt. The first one came to light in the 1980’s when it was found in Los. To one of their clients. That copy was in pretty wrecked condition but. It told the Beatles collecting community that it existed and the hunt. Since the 1980’s two other copies have surfaced and have been. One of those two was also in wrecked condition and one was about VG+. I got this copy years ago as part of a collection I bought from a former. THIS COPY IS STILL SEALED in the original 1967. Shrink wrap and in PERFECT CONDITION. There is no finer copy anywhere. It is a true Museum piece and would be the cornerstone of any Beatles. NO Beatles collection can ever be complete without this one. It SHOULD be in a Beatles Museum, if and when one is ever put together. It is my belief that record. Prices are still in their infancy when compared to other Pop Culture. Collectibles such as Comic Books, Baseball Cards, Movie Posters etc. Prices for records are certainly rising at least for the great. And no matter what happens, in the future, a record. Like this will be worth more than it will sell for today. I have been collecting and dealing in rare records for over 45 years. The top of the line Beatles records, in top of the line condition, have. Been going up each and every year. Certainly one of the all time rarest of all Beatles LP’s. ONLY KNOWN STILL SEALED ORIGINAL COPY. It is PERFECT MINT, with not one. There is a small drill hole in the cover, put there by. On November 3rd, 2011, THE GUARDIAN newspaper in London ran a story. They called it “the world’s most valuable” record and. Estimated the value at that time to be SEVENTY THOUSAND POUNDS. Have been NO sales of any copy since the story in the GUARDIAN in 2011. This is your chance to own this outstanding part of Beatles history. I have dug into the archives and pulled out some nice Beatles Items for. All are original, first pressings and many of. Them are unopened and never used—just put away, by me, for future sale. Included is the insanely RARE Original 1967. Pepper’s Lonely Hearts Club band Alternate Cover featuring CAPITOL Records salesmen and executives. I have been hoarding these items for many years and when they are gone, they are gone! See photos for condition details. Sealed Lp’s will be secured tightly between oversize flats to prevent jacket splits. See photos for label condition and track details. All records are original pressings unless otherwise noted, we do not sell modern reissues or bootlegs. PLEASE CHECK THE APPROPRIATE BOX UPON CHECKING OUT. THIS SERVICE IS NOT AVAILABLE TO BUYERS OUTSIDE OF THE USA. SORRY THAT’S POST OFFICE RULES, NOT US. Unless other arrangements are made. He is a contributor to many re-issues of original Blues songs and known everywhere as THE man to go to for evaluation of rare Blues 78’s and advertising material from the 1920s to the 1950s. Guarantee: Every item I sell is 100% guaranteed! You must be totally happy with anything you win in my auctions! The item “The Beatles Sgt. Peppers Lonely Hearts Club Band Capitol Executives cover RARE” is in sale since Friday, April 30, 2021. This item is in the category “Music\Vinyl Records”. The seller is “johntefteller” and is located in Grants Pass, Oregon. This item can be shipped worldwide.