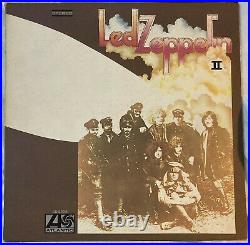 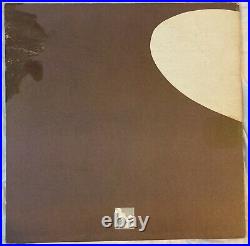 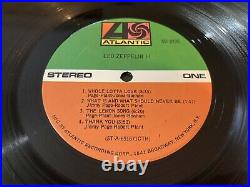 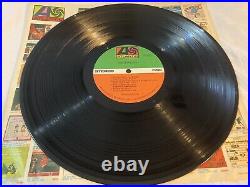 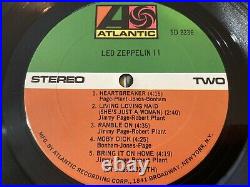 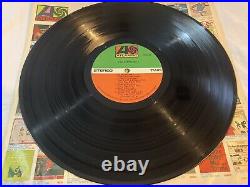 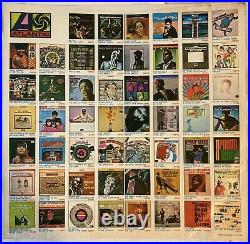 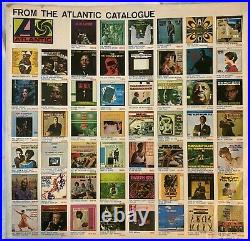 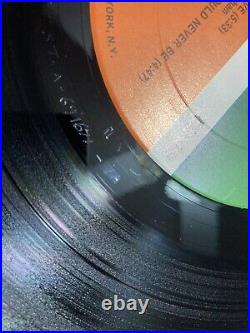 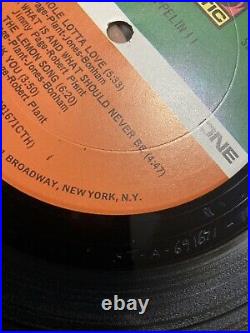 Original First Pressing Record Cut and pressed by Robert Ludwig from 1969. “RL” in the deadwax on Side One! Atlantic Records SD 8236 (Original early pressing). RL initialed in the deadwax/trailoff stampers on Side One! Robert Ludwig mastered vinyl!! Pressing of the superb and widely acclaimed Robert Ludwig pressed and cut LP edition of II. Stamper numbers/letters in the trail-off vinyl deadwax are as follows. Side One: ST-A-691671-1A “RL” C3. Side Two: ST-A-691672-D “SS LH” (another engineer). Vinyl is in very clean VG condition and still has great sheen. Side One has numerous visible very light scuffs, hairlines and very light scratches. Side Two has several heavier scuffs, hairlines and very light scratches. No deep scratches and the entire record plays all the way through without any issues. Despite the less than perfect condition, this thing sounds awesome! Nice Atlantic green/white and red labels are stamped (ST-A-691672CTH) and (ST-A-691671CTH) and are still super clean but does have visible light spindle marks. Looks like the original owner liked this record: Original Atlantic paper inner sleeve is still in great condition with vibrant graphics with only slight yellowing/ageing/browning on the edges. One inch seam split at the bottom. This also includes the 1841 Broadway, New York, New York 10023 address. Audiophiles have claimed that due to the extreme sonics of this particular pressing, the turntable needle literally jumps when played at higher levels! Gatefold cover is still in excellent shape and amazingly no detectable ring wear front or back. Spine is intact and solid and there is only some very minor fraying/feathering on the corner edges. Corners show some wear and feathering. There is a 1 crease on the top right seam. Some light wear on the lighter parts of the cover. The only major flaw is the back cover has a large stain/damage on the upper left side. Inner part of the gatefold is in super clean condition. Here is some info about Robert Ludwig and this particular cut. Was first released, it was cut with full dynamic range and bass response, huge stereo separation, and guitars and drums that would tear through your speaker cones. The person responsible for this was legendary mastering engineer Robert Ludwig (hence the RL), and he apparently did not show any restraint while transferring the master tapes to wax. The story goes that Atlantic founder Ahmet Ertegun gifted an RL copy to his brother to give to his daughter. That was so popular in the 50s and 60s, couldn’t track the record. The needle was literally jumping out of the grooves and skipping all over the place. The label’s knee-jerk reaction was to immediately recall the RL release and quickly order a less dynamic, more tamed re-cut, which is what most people own today. Fortunately, some RL mastered originals made their way into the wild and have become highly sought after and valuable, with copies fetching hundreds of dollars. STERLING RL designation (Sterling is the mastering house, RL is for Robert Ludwig, the mastering engineer). Robert “Bob” Ludwig is among the greatest mastering engineers in the history of recorded music. He is famous for putting his magical touch on the mastering of several critically acclaimed “top audio” / audiophile editions of albums by Led Zeppelin, Steely Dan, Roxy Music and many more. Contrary to what you may read on other auctions for LP editions of this album and Led Zeppelin II, Robert Ludwig had nothing to do with the actual “mix” of these albums. These albums were already mixed when he got to work on them. His job was to master them in a way that would help bring out the best sonic value of what the mixing engineer, producer and actual artist intended. The excellent, balanced sonics from this recording, and the Robert Ludwig mastering make his edition of II, the best, in my opinion, of any that have ever been pressed (including later remastered editions). See my future auctions for several Bob Ludwig mastered LPs including original SD 7255 pressings of Houses of the Holy. And RL initialed II! This is a fantastic sounding mix and it sounds fantastic! You all know that the 60’s, 70’s and 80’s vinyl pressings are the way to go and the recording, mastering, quality, and sound are FANTASTIC! You won’t find this stuff anymore. Just take a listen for yourself like I did. I grade according to Goldmine standards. That means a VG+ vinyl will be just that, an LP that is in beautiful condtion! I absolutely hate it when dealers ameliorate the condition of the vinyl!!!!!!!!!!!!!! All my Lp’s have been stored in my house upright on a shelf in an air conditioned and dry environment, meaning no warping, staining or mildew! Please see the photos! If you need more photos or a better description, please let me know and I will gladly describe it in detail for you. The item “Led Zeppelin II RL Robert Ludwig cut VG/VG Atlantic SD 8236 Super clean record” is in sale since Thursday, July 8, 2021. This item is in the category “Music\Vinyl Records”. The seller is “sungae” and is located in Houston, Texas. This item can be shipped to United States, Canada, United Kingdom, Australia, Ireland, Mexico, New Zealand, Singapore, United arab emirates, Malaysia.