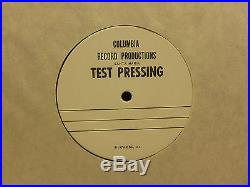 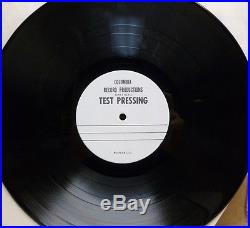 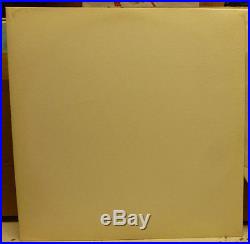 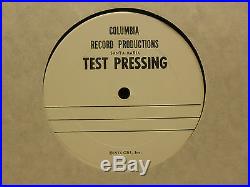 This ULTRA RARE LP was never released to the public! This is the unreleased test pressing for the original version of Bob Dylan’s BLOOD ON THE TRACKS album. Before the official version of the album was released in 1975, five of these tracks were re-recorded. The original recording of the album is intact here. The following tracks were later re-recorded for the 1975 release. “Tangled Up in Blue”, with different lyrics. “You’re A Big Girl Now”, alternate take. “Idiot Wind”, with different lyrics. “If You See Her, Say Hello”, with different lyrics. “Lily, Rosemary and The Jack Of Hearts”, alternate take with extra verse. ONLY FOUR OTHER COPIES OF THIS LP ARE KNOWN TO EXIST!! LP has been play graded as VG++ to Near Mint, but mostly in Near Mint condition. It does have some very light (VG++) intro ticks. LP also shows a very small, slight intro warp which will not affect tracking on most turntables. The jacket is plain white with no writing or printing. It is in excellent condition, with very light shelf wear. It also includes the original paper sleeve that came with it. The printed label reads COLUMBIA RECORD PRODUCTIONS, SANTA MARIA, TEST PRESSING, 1974 CBS, INC. The metal stamped matrix in the lead-out groove on side one is PAL-33235-1A, side two PBL-33235-1A. The item “BOB DYLAN Blood on the Tracks Vinyl Test Pressing ULTRA RARE COLLECTABLE” is in sale since Tuesday, November 01, 2016. This item is in the category “Music\Records”. The seller is “randys.records” and is located in Salt Lake City, Utah. This item can be shipped to United States.