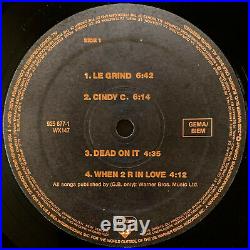 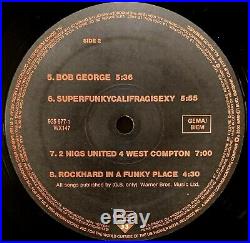 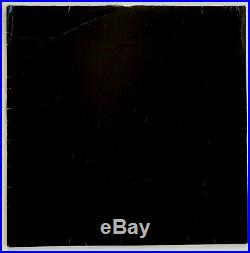 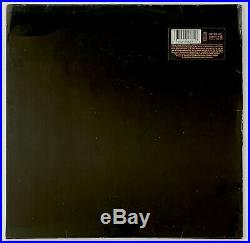 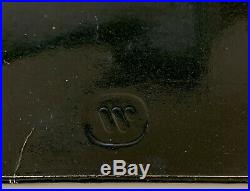 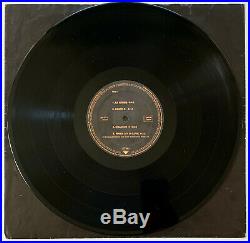 Recordmecca is proud to offer an original 1987 German first pressing LP of Prince’s ultra-rare The Black Album. According to the comprehensive website The Black Album Info, Of the 500,000 German copies known to have been pressed, around 50 records are likely to have escaped destruction. This is one of those ultra rare copies, literally saved from destruction in an incinerator (more below). Recordmecca’s Jeff Gold is a former Warner Bros. Records executive vice president/general manager who worked closely with Prince. One week before its planned release in December 1987 and paid for the destruction of more than 500,000 copies that had already been produced. In the 30 years since, fewer than ten original U. Copies of the vinyl LP have surfaced. We obtained this German first pressing from a Danish woman who related the following story in her included letter of authenticity. In the late 80’s, my father had a temporary job at Vestforbraending, an incinerator in Copenhangen. There he found a box with records/albums that were supposed to be destroyed… [he] took some random albums to give them to me since I had a record player, but not many albums. Among these was Prince’s Black Album. She continues at length, noting that many years later her son-in-law saw the album in her collection, and told her it was very rare, leading to its sale to Recordmecca. The Black Album is perhaps the most bootlegged album of all time, with extremely convincing European counterfeit copies confusing many collectors. This authentic copy has all of the hallmarks necessary to confirm a Black Album is authentic, including. The orange triangle must contain a “33” in white font. If “33” is printed in black, the album is a counterfeit. The sleeve must be all black with the no printing except for the catalog number (UK: WX 147 925 677) in orange on the spine and top edge. At the bottom of the back cover, below the sticker, there must be an embossed Warner Communications “W” logo. The labels must be black with orange type, aligned exactly as in the photographs here, with no mention of Prince. The matrixes must contain the following stamped information: Side A: R/S Alsdorf 925677-1-A or 1-A2 Side B: R/S Alsdorf 925677-1-B. The disc on this copy plays virtually Mint with no issues at all, and is visually in VG+/VG+(+) condition. It is very shiny, but there are numerous superficial scuffs from being stored outside the innersleeve. There are a few non-feelable scuffs, none of which are remotely audible. The labels are in excellent condition with some light spindle marks when viewed directly under incandescent light. But once again, the album sounds great. The album cover is in VG+ condition, with some creasing to the delicate black surface coating. There is a 1/2″ area of very minor splitting to the spine affecting the letters “UK: WX but the rest of the catalog number is clear. There is a 1 1/4″ area of splitting to the top spine that affects the letters “X 147 925 677″ but “UK:W is clear (see the close-up photos here). The sticker is in excellent condition, and the embossed “W” clear. The all-black custom innersleeve is in VG+ condition with some creasing and splits on three sides, easily repaired if you wish. An extraordinary opportunity to obtain a very rare and desirable Prince collectible. We grade all records visually, cover first, then disc; using the abbreviations M / NM / EX / VG with + and. We try to describe everything as accurately as possible, and spot check any vinyl flaw that looks like it might make a sound. We just grade accurately, describe any flaw, and sell only high quality rare records in fine condition. See our other listings for more from this fantastic collection. Recordmecca’s clients include the Smithsonian Institution, the Rock and Roll Hall of Fame, the Experience Music Project, the Country Music Hall of Fame, and the Victoria & Albert Museum. Recordmecca’s Jeff Gold was named by Rolling Stone as one of 5 Top Collectors of High-End Music Memorabilia. He authenticated previously unknown Bob Dylan manuscripts for PBS’s History Detectives, appeared as a featured appraiser on VH1’s Rock Collectors, and has been profiled as a top dealer and collector in the books Vinyl Junkies and Retromania: Pop Culture’s Addiction to it’s Own Past. Gold is author of the acclaimed books Total Chaos: The Story of The Stooges/As Told By Iggy Pop; and 101 Essential Rock Records: The Golden Age of Vinyl a survey of seminal rock albums, featuring contributions from David Bowie, Iggy Pop, Johnny Marr and Graham Nash. Check our feedback; you’ll see that we are dedicated to providing superior customer service and follow through. We guarantee everything we sell to be authentic with no time limit. The item “PRINCE ORIGINAL1987 German 1st PRESS -THE BLACK ALBUM- LP LIFETIME GUARANTEE” is in sale since Sunday, April 12, 2020. This item is in the category “Music\Records”. The seller is “recordmecca” and is located in Venice, California. This item can be shipped worldwide.