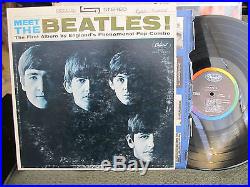 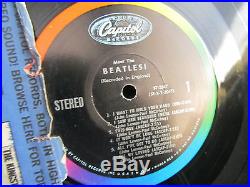 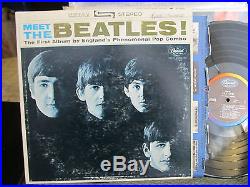 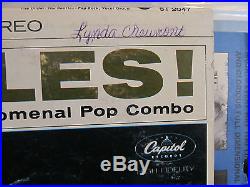 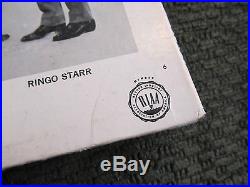 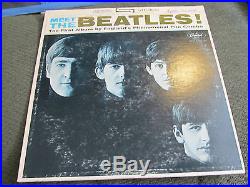 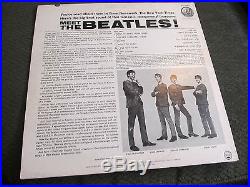 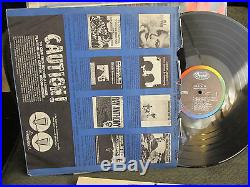 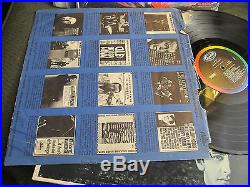 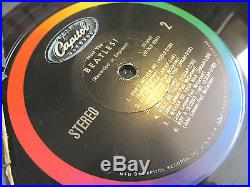 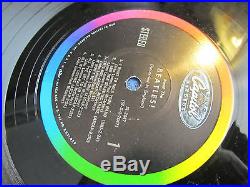 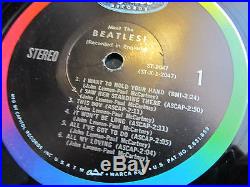 Meet the Beatles 1964 original vinyl LP 1st debut stereo st2047 rainbow band label, olive and bl ue font, RARE BMI 1 version! Vg+ lp has many surface use hairlines , but no tactiles, vg cover with rubs (see pics) no splits, name to upper corner! Vg shape printed capitol inner sleeve is mainly a dark blue color with lotsa album art photos, inner sleeve is tattered on one side, #6 riaa symbol on back, matrix etches “A5/A5″ matrix hand etches! Dark olive and light blue cover font!!! Seco nd label variation, 1 bmi, DOES NOT HAVE “PRODUCED BY GEORGE MARTIN” CREDIT PRINT, appears to be one the west co ast #6 tru e 1st pressings , (the #6 identifies it as a los angeles pressing), has the “stereo needle d amage note” at bac k lower edge, MEGA SCARCE!! 11 ASCAP’s & 1 BMI ON LABELS. MADE IN USA FACTORIES SCANTON PA – LOS A NGELES CALIF. ” NOTE PRINTED ON LOWER BACK , NO PRODUCER CREDIT ON BACK of COVER, ALSO HAS the ” STE REO NEEDLE TO AVOID DAMAGE note. I WANT TO HOLD YOUR HAND. I SAW HER STANDING THERE. IT WON’T BE LONG. ALL I’VE GOT TO DO. DON’T BOTHER ME. TILL THERE WAS YOU. I WANNA BE YOUR MAN. NOT A SECOND TIME. Www info on pressing variations: ULTRA-RARE WEST COAST FIRST PRESSING!! BECAUSE 80% OF CAPITOL’S ALBUMS WERE PRESSED ON THE EAST COAST, THE WEST COAST PRESSINGS OF THE FIRST THREE LABEL VARIATIONS ARE CLEARLY MORE SCARCE. THE FACT THAT THE FIRST LABEL VARIATION OF THIS LP WAS ONLY PRODUCED ON THE EAST COAST (SCRANTON), THE SECOND LABEL (ONE “BMI”) PRODUCED ON THE WEST COAST IS THEREFORE THE VERY FIRST PRESSING OF THE LP. FURTHERMORE, ON PAGE 19, OF BRUCE SPIZER’S GREAT CAPITOL ALBUMS BOOK, HE STATES THE FACT THAT THE STEREO VARIATION OF THIS LABEL STYLE SHOULD EXIST, BUT AS OF PRESS TIME, IT WAS NOT CONFIRMED. IT HAS BEEN CONFIRMED SINCE – AND HERE IS ONE OF THE VERY FEW MEGA-RARE COPIES! Ships in sturdy cardboard. This includes UK, Europe, Japan, Austrialia, South America, Etc. Vinyl grading is usually based on the Goldmine standard and is as follows. SS Still Sealed For the collector that demands nothing but perfection. M Mint – a near perfect, or unplayed record. NM Near Mint – in factory fresh condition, like new. EX+ – close to like new with only superficial signs of use that don’t affect play. Will satisfy all but the most vain and demanding collector. EX – a used, reasonable copy. Shows slight signs of wear. VG+ – There will be obvious signs of wear and the possibility a few skuffs and/or light surface noise between tracks or during quiet passages, but still quite nice. VG – significant wear and marks and usually quite noticeable surface noise, still plays great. Good – In the record world, “Good” is not good! From here on down, we’re talking about beat-up records! The item “Meet the Beatles LP 1st debut stereo st2047 WEST COAST #6 RARE BMI 1 version” is in sale since Saturday, March 02, 2013. This item is in the category “Music\Records”. The seller is “ghelderode” and is located in Los Angeles, California. This item can be shipped worldwide.