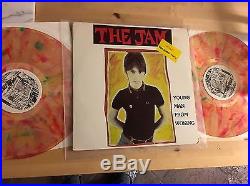 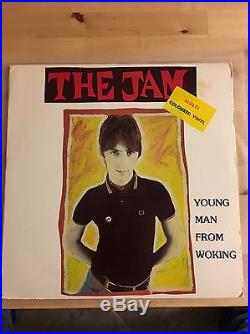 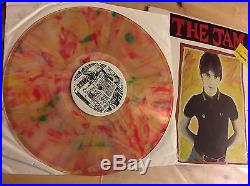 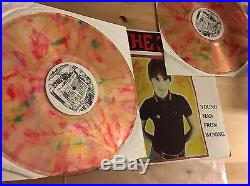 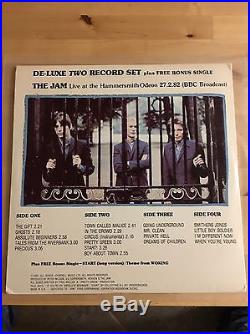 THE JAM – YOUNG MAN FROM WOKING. Super rare and nearly impossible to find if you know your JAM. 1982 2LP set recorded live at the Hammersmith Odeon in London for the BBC Broadcast. Color cover which has “Multi Coloured Vinyl” sticker on front. Riginally this album included a bonus 7 record as noted on the back cover. However, it is now missing and the 7 record is NOT included. Black vinyl issues of this album are common, but this copy is on t. Both records are transparent pink vinyl with blotches of pink, green and yellow. Record 1 shows what appears to be a roman number I on one side and II on the other handwritten with black pen. Reportedly, only 50 copies were pressed on colored vinyl. Please note that the track listing on the back cover doesn’t match exactly as it plays. Disc one seems to be the same with the addition of “Down in a Tube Station”. Disc two plays quite differently than as listed and the sound quality is not nearly as good as disc one. The vinyl looks great, hardly played. The cover is in very good condition as well, with just a few creases, mostly in the corners. The item “THE JAM Young Man From Woking Colored Vinyl 2LP Set RARE Verzyl” is in sale since Tuesday, February 21, 2017. This item is in the category “Music\Records”. The seller is “leocitron” and is located in Los Angeles, California. This item can be shipped to United States.