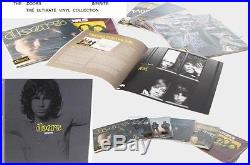 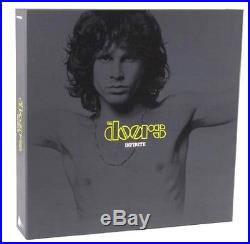 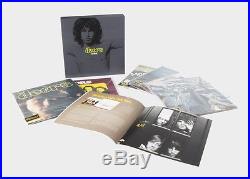 The Doors – Infinite LP Box Set. A chronicle of The Doors in the studio, captured with the highest sonic quality possible! Now, you can break on through’ with all six of The Doors’ studio albums in a deluxe box set on 45 RPM LP! SINCE YOU ARE LOOKING AT THIS, YOU OBVIOUSLY KNOW ABOUT THIS SET AND HAVE DONE ALL YOUR HOMEWORK. YOU WILL LOVE IT. IT IS BRAND SPANKIN NEW AND SEALED. WHO ELSE DOES THAT? ATTENTION : THIS IS THE ” REAL DEAL “. I RECEIVED IT DIRECTLY THROUGH A SONY DISTRIBUTOR. IT IS NUMBERED , SEALED AND READY FOR A GOOD HOME BELONGING TO A TRUE DOORS FAN AND COLLECTOR. The band’s six Morrison-era albums, on 45 RPM double LPs. Limited to 2,500 numbered copies each. All remastered from the original analog sources by world-renowned audiophile mastering engineer Doug Sax and The Doors original engineer Bruce Botnick. All original stereo mixes! 45 RPM LPs pressed 200-gram vinyl by Quality Record Pressings! All LPs in deluxe gatefold tip-on jackets and anti-static rice paper inner sleeves. 12 booklet featuring 19 photographs and a 2,700-word essay by The Doors biographer Ben Fong-Torres. All packaged in a textured, fold-over box. All of The Doors’ legendary albums The untoppable self-titled 1967 debut The Doors, one of rock’s most important debuts, Strange Days, Waiting For The Sun, The Soft Parade, Morrison Hotel, and the visceral L. Woman have been remastered by Doug Sax and The Doors’ original engineer Bruce Botnick, and the LPs pressed on 200-gram vinyl at Acoustic Sounds’ own Quality Record Pressings plant (fast gaining popular consensus as the best pressing plant in the world). But this special Doors’ reissue features more than just spectacular sonics. We’ve included a 12-inch specially illustrated booklet with 19 photographs and a 2,700-word essay about the band from Ben Fong-Torres. Fong-Torres, a former editor for Rolling Stone, got the last interview with lead singer Jim Morrison before Morrison’s departure in Paris in the spring of 1971, never to return. Portions of that last interview with “lead lizard” Morrison also appear in the included booklet. All of this comes packaged in a textured fold-over box. Break On Through (To The Other Side). Alabama Song (Whisky Bar). I Looked At You. End Of The Night. Take It As It Comes. You’re Lost Little Girl. Love Me Two Times. My Eyes Have Seen You. I Can’t See Your Face in My Mind. When the Music’s Over. WAITING FOR THE SUN. Hello, I Love You. Not To Touch The Earth. Summer’s Almost Gone. We Could Be So Good Together. Yes, The River Knows. Tell All The People. Waiting for the Sun. You Make Me Real. Queen of the Highway. Been Down So Long. Cars Hiss by My Window. The WASP (Texas Radio and the Big Beat). Riders On The Storm. The item “THE DOORS INFINITE 12 LP’s 45 RPM 200 G. VINYL LIMITED# NEW, LowPrice” is in sale since Thursday, February 11, 2016. This item is in the category “Music\Records”. The seller is “robtherich1″ and is located in Los Angeles, California. This item can be shipped worldwide.